Three killed in Bangladesh attack near Eid prayers. Bombs hurled and gunfire exchanged at gathering of 200,000 people in the northern Kishoreganj district.

As per sources at least two policemen and a female civilian have been killed and nine police officers wounded when bombs were hurled near a huge Eid prayer meeting in northern Bangladesh, officials said. At least 200,000 people were gathered near a school in the northern Kishoreganj district when the bomb exploded on the premises on Thursday, according to police and local media.

There were exchanges of gunfire at the scene. One of the attackers was shot dead as of now.

“Two policemen, an attacker and a woman who was shot during the gunfight were killed,” national police spokesman AKM Shahidur Rahman told the AFP news agency.

“Nine policemen were also injured. They are in a critical condition and have been shifted to a military hospital in Dhaka.”

Two suspected attackers were arrested, including one who had been shot and injured, while a pistol and machete were recovered from the scene.

There was no immediate claim of responsibility for the attack. 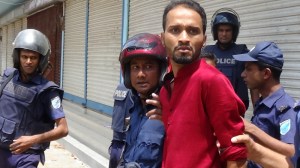 “They usually have very good security because they are such large gatherings,” he said. “They are one of the best protected events in the country.”